skip to main | skip to sidebar

I do spend time sometimes looking at an area on Google Earth Satellite view seeing if can spot something new. Or  it is something that I noticed while looking for something else not related to riding. 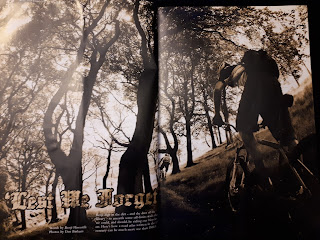 It is probably not something new as in never been ridden before. Just a track that is rideable and is new to me. Or it is a neglected and forgotten unmaintained road that while it might take time and after numerous recce trips. It can become part of a route. 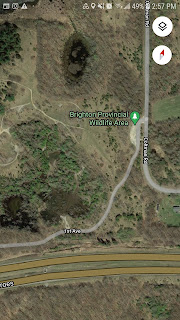 And a few days ago found a spot while searching for something else that I didn't know was there near Trenton. It is apparently a provincial wildlife area. Similar in idea to the one near Gananoque which have visited numerous times. After a bit of online checking it seems like it might be good. 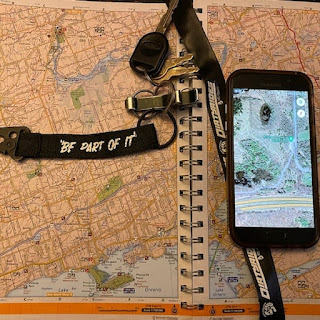 Brighton Provincial Wildlife Area
Have to say though I do find it interesting that this area is listed on a site for Peak Bagging. Something that I would think was a thing in Ontario. But hey someone had fun doing this it seems. And good for them.

But till take a trip later in the year and recce it. Won't know if it will workout. But that is half the fun is checking these out and seeing if their pan out. And even if it doesn't it was an adventure and can still go ride Batawa after. Then sit by the water in the back of the truck before heading home.

Dirty Rides MTB Apparel- Be A Part Of It

Today was not a good ride day. I rode the protected the bike lane on Bath Rd as have mentioned before that since the 2019 incident have a hard time near traffic on the road. Only way around that has been to ride on sidewalks, so far over the gravel shoulder almost in the ditch on any busy road, and so on. With elevated heart rates and paranoia if have to be on the busy road itself. 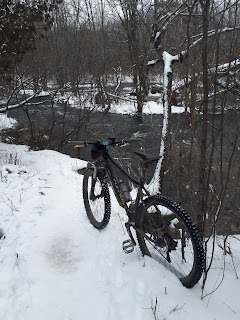 At the light to cross over like am supposed to and crossed when it was green. A woman turning right ran the red light and almost nailed me. Of course this triggers the PTSD from getting hit in 2019. Fortunately was able to get away before things degraded further. But reality is that it isn't simply the end of it. What no one sees is the rest of the ride me trying not to spiral or over think it all. And that is the problem with trauma.
2019 Incident
Trauma when it comes to mental illness like PTSD isn't seen as easily. And even if triggered while out for a ride in the woods it is to easy to say "Oh, it is no big deal. Your exaggerating and being dramatic" type assessments. But the reality is even if you where some PI following me and saying "Oh, he looks fine" reality is I will be trying not to be more angry at people or not over thinking, and what ever else my messed up brain might decide to do.
Good part is after a while things got better mentally. But it did provide a fresh reminder that I do need to continue with the ways I have found to get in rides.
Team No Fixed Income is supported by:
Dirty Rides MTB Apparel- Be A Part of It
Posted by Chris at 6:52 PM No comments:

Abundance of Gloves For Winter

Winter when every day can be a different temp in Ontario. Especially around the Kingston area. And even between the start and end of the ride. And even during the ride it can change. 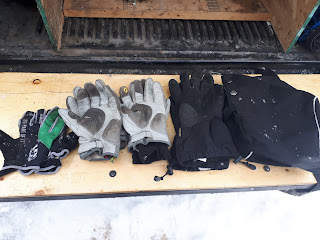 So have various types of glove to ride with depending on the weather. Which will go into further on another post with more detail.

Dirty Rides MTB Apparel- Be A Part of It

The Snow Was Meh

Saturday was the first snow ride of 2020 and it was a barely passable. Good thing the decision was made to ride to a section of the Collins Bay trails. And on the way find that something was done. 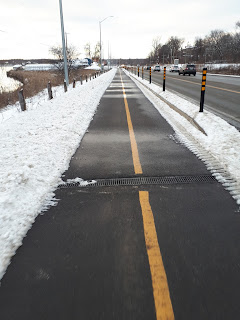 Local Muni had decided to plow the bike route to near the trail section was going to. So this was a treat. Who knows if they will plow it again. But in truth this would be the most rideable of the ride. As once on the trail it was a bit more challenging. 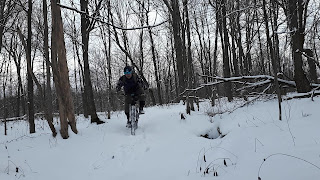 Wet snow made for less than optimal traction. It left much to be desired as it became a alternating ride then hike then ride and so on. 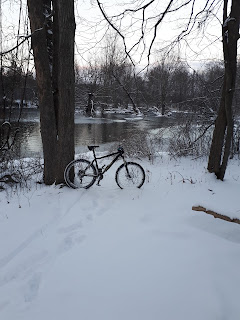 In the end other than mileage the ride itself was barely passable if that. While the time in the woods at the Dirt Camp was ok.

Dirty Rides MTB Apparel- Be A Part of It 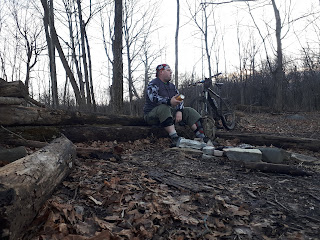 And with that the next day came across the desk of Team NFI the end of year data from Strava. 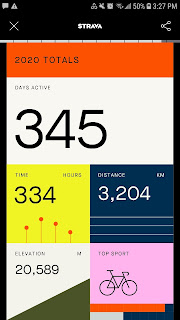 With that it is the end of the year and will leave it at that for now. And wait to see in the coming weeks if any ideas come to mind for little goals and such.

Dirty Rides MTB Apparel- Be a Part of it

July 2019 had looked at the rough map of the Thomas P Murray Recreation Trails had spotted what appeared to be a look out. So set out see if could ride to it. Due to numerous factors from bugs, over growth, and hot July day came up short.

This time after looking over the map a few times went with a shorter route plan that would start from Long Lake Rd. Parked off the road and started up Gun Mtn Trail heading for the peak. As to be expected lots of sandy dirt and rock with some sections steep enough that Hike-A-Bike was the best option. 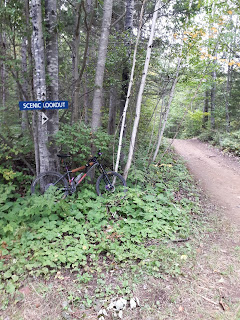 With the last section of the climb to the peak was greasy and minimal traction had to Hike-A-Bike till the trail got a wee bit easier. Once over that rode for a bit till the junction with the trail that took you to the actual peak. 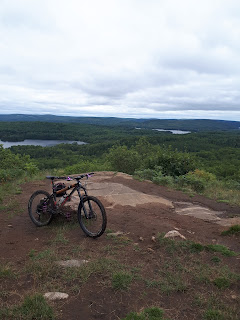 And popped out at the top with as the photos show was wide open with views depending on which way you looked of Combermere and Kaminaskeg lake. Not bad actually. 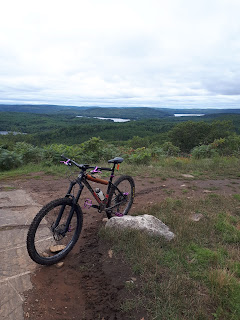 Of course being another summit it requires a drink and since I didn't have a beer a flask of Rum would do. Reward for the second attempt to find this spot. 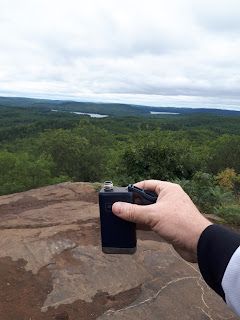 While at the top I took a look at the map and realized that in 2019 had missed the turn. That was all it was when I missed finding the peak while dodging Deer Flies and such. Well mistakes happen and was able to return to try again. 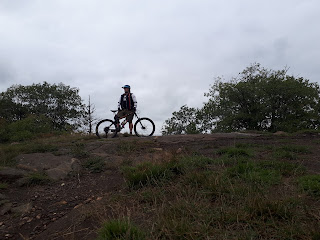 This day it was warmer then it was the earlier August ride up McGillivary Peak. Warmer without the rain so was able to take my time and enjoy this more. But like all things it eventually is time to ride. 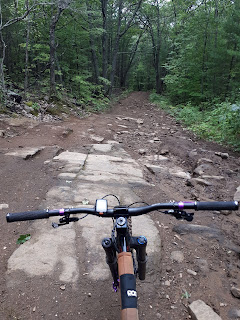 After a check of tire pressure knowing would be coming down through a rock garden.  It was downhill time. And yes while I had leg armour on I did kind of go slower. I admit I started wishing I had a full face helmet. I do admit that it could be the over thinking after last years getting crushed by the car that might have caused the nervousness. 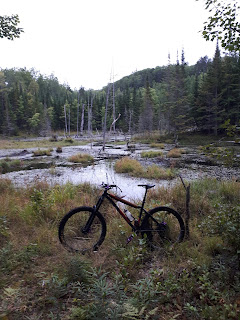 After the downhills it was a easy ride back towards Long Lake Rd at the Ute. And before knew it was back at the Ute and task achieved. The missed turn was corrected and time for some Dr pepper from the cooler. 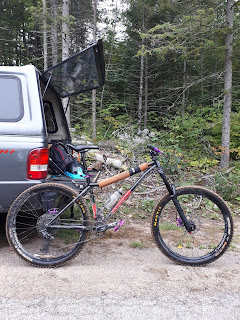 And while I at this point I made the decision that a helmet with a removable chin guard was a needed piece of kit. One with MIPS to decrease a further issue with a head injury but also to reduce the over thinking which could cause a crash.

Maybe one day in the future will be back up in Barry's Bay and have a chance to nail both peaks on the same ride. But hopefull would be in August with no bugs.

Info: These trails should be treated as backcountry mtb trails. Be prepared for all contingencies and have a plan. Cell service should not be relied on as your only option for if things happen. Know when to pull the plug and try the next day.

Dirty Rides MTB apparel- Be A Part of It

In August was able to to get up to the Barry's Bay and Combermere area again. And that gave the oppurtunity to ride a different route. One I had thought of but kinda lost interest as the year before it was bug season when I tried another section of the Thomas P Murray Recreation Trails.

After parking at the trail head just off Chanonhouse Rd it was time to get to seek the route and the peak. And to make things more interesting let us add a wee bit of rain and drizzle. 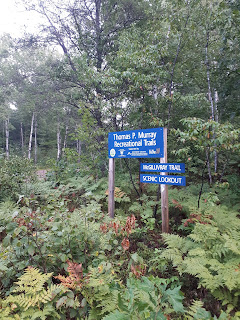 Shortly after leaving the Dirtbag Ute and down the trail began the grunt climb of the day Up a unrideable steep hill filled with sand and gravel. As the Stamina Man once said...if you haven't pushed/carried your bike was it hard enough? 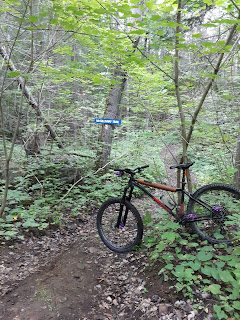 Once up that nasty hill the rest of it was double track with ups and downs as followed the route that was roughly outlined. Reality is when your not a local takes longer to go a shorter distance in backcountry trail systems. Because you do have to stop a bit more to double check trails versus your location because signs can change and trails may be re-routed. 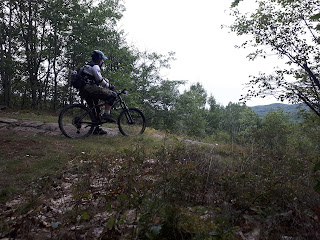 About half way up it stopped drizzling and actually got a wee bit brighter. And finally topped out at the peak where the view point was. Nothing like the mountains anywhere in BC. But better then nothing. 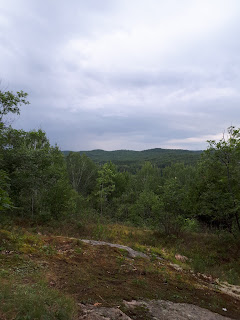 Of course one cannot get to the top and not have a beverage at the top. Summit beer was required to go with the view. 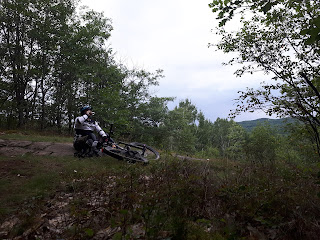 Keeping aware of the time and it being after 5pm. And keeping in mind that it could potentially start to rain and get cold. It was time to begin heading back. On the way out to the main trail noted a bit of shelter that could be used if necessary. 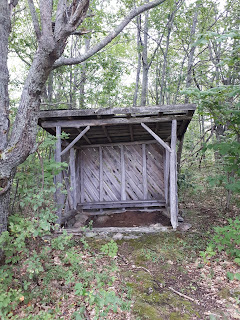 Followed the double track that would take me to Rockingham Creek and then follow the creek. With more of the same double track the whole way with one more hill needed to be hike a biked. The rest was sand and rock filled but rideable. Turns out that left at the right time as it decided to rain. Not just drizzle but actual rain. So stopped and pulled out the packable rain jacket. 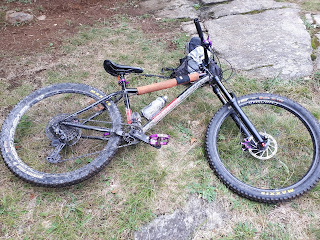 Another 25 minutes of riding in the rain got to the junction where the double track connected to Chanonhouse Rd. And followed it back to the Ute parked at the trailhead.  And of course it was still raining. 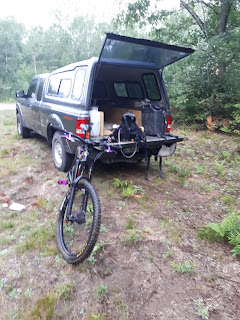 Still raining which sucked as if it hadn't would have been less need to get rolling. However I readily admit that the Ute wasn't quite gear ready yet for relaxing in place . It is still a work in progress.

Info: These trails should be treated as backcountry mtb trails. Be prepared for all contingencies and have a plan. Cell service should not be relied on as your only option for if things happen. Know when to pull the plug and try the next day.

Dirty Rides MTB Apparel- Be a Part Of It